Smell has positive and negative effects. Most people enjoy the smell of flowers and consider the smell that comes from sewers to be dirty. Smell is all around us. Often we scarcely realise that we can smell things, but subconsciously we do retain a memory of what we smell. Your own house has a special smell, just as your own work environment or school does. Sometimes you smell something again after a long period of time and it spontaneously brings back memories.

If smell has a negative effect, we refer to it as odour nuisance. Odour-related complaints are usually only reported in the media if the odour in question is the result of commercial activities or an accident on an industrial estate. The Rijnmond region, which is home to lots of heavy industry, is infamous for being a source of odour nuisance. However, odour can, of course, occur in all kinds of other places and possibly in your living environment as well.

Even if someone perceives an odour as nuisance, that does not mean it is unacceptable from a social or environmental legislation perspective. A factory can, for example, be operating well within its permit requirements but can still cause a nuisance for people living nearby. It is, in fact, perfectly possible for a certain quantity of odour nuisance to be legally permissible. 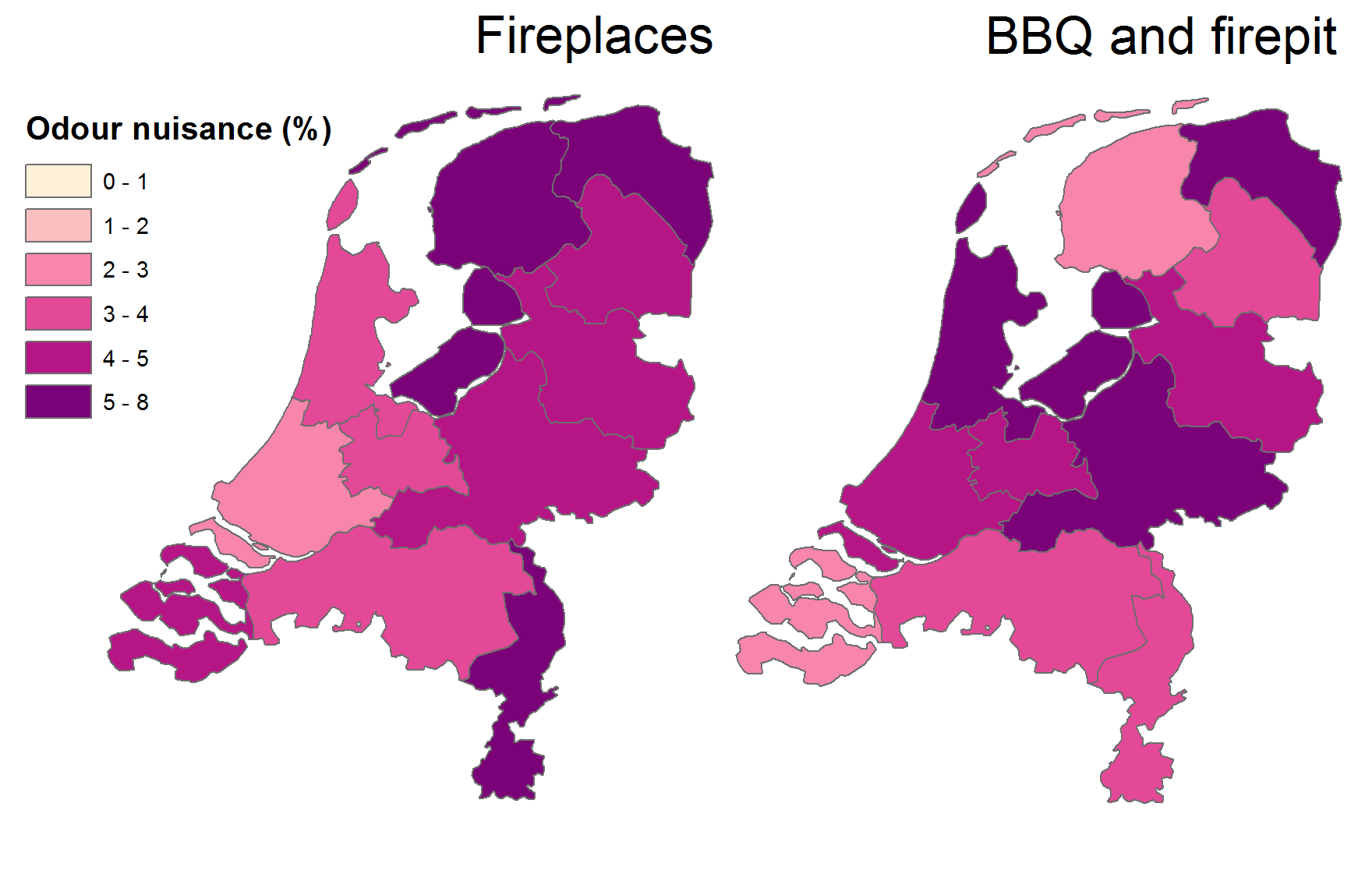 Local differences in odour nuisance are not reflected on the maps. Ask your municipality or the Public Health Service if there is specific information about your neighbourhood.

Smell hangs around its source but, depending on its strength, it will also spread to the wider surroundings. In the case of odour nuisance, the smell is particularly a problem downwind. At the same time any wind will dilute the smell and the odour will also weaken the further it is from its source.

High temperatures can make odours worse. In any event fragrances become more intense in warmer weather and sometimes heat in itself will lead to stench. Sewers tend to smell more due to more rapid rotting processes on hot summer days.

On the other hand people burn wood in their fireplaces more often in the autumn and winter. If there is plenty of wind, the smoke will disappear up the chimney quite easily. However, on frosty days when there is almost no wind, the atmospheric conditions will actually mean that the smoke is scarcely dispersed. Indeed, the smoke will then easily descend on the nearby surroundings. If this kind of weather lasts for a number of days, it can easily cause smog (partly in combination with other sources of pollution). Such smog is not only unhealthy in itself, but also leads to odour nuisance.

After noise pollution, odour nuisance is responsible for the largest number of environmental complaints. In the following tabs we discuss these sources of nuisance, namely odour nuisance caused by fireplaces and multi-burner stoves, road traffic, companies and industry and agriculture and cattle breeding.

Smell is partly caused by volatile chemical compounds which travel through the air and then come into contact with the mucous membrane of the nose. This is where the sensory cells are located: the olfactory cells. From here, various nerves run to a special area of the brain. Intense exposure to smell leads to a stimulating, irritating or burning feeling. This may trigger protective reflexes such as sneezing, breathing less deeply and holding our breath.

The nose is a sensitive organ. You can smell some substances even at very low levels. If you smell a substance, the concentration will not necessarily be high enough for you to become ill. The type of substance and how much you breathe in determine whether you become ill or not.

The substances which cause odour nuisance

The odour from an intensive livestock farm is the result of a mixture of various emissions, including ammonia (NH3), hydrogen sulphide (H2S) and various volatile organic substances.

In the case of industry the majority of the odour is produced by biological (decomposition) processes, the release of volatile organic compounds, the release of aromas attached to particulate matter and the heating of materials. When wood is burned the particles that cause odour are predominantly all kinds of types of carbon compounds, organic acids and aldehydes.

Odour emissions can lead to a broad range of health effects. In the first place odour is a nuisance and therefore has a detrimental effect on people's well-being and daily activities. The complaints referred to in surveys include headache, breathlessness and nausea. Other complaints relate to dizziness, stomach ache, insomnia and even fear and depression. Just like all chemical substances, aromas may be toxic . Extremely pungent substances can irritate the mucous membranes of the eyes and upper respiratory tracts, although that is usually only the case in the event of calamities.

There is no link between toxicity and odour. Substances that have no odour can be very toxic. Most of the substances found in the residential environment have an odour which is detectable at lower concentrations, before the substance can cause any toxic effects. The type of odour, how someone responds to it and the attitude towards the odour and/or its cause can partly determine the extent to which nuisance is experienced. In addition, the expectation as to whether the odour will increase or lead to health effects also plays a role. People with asthma, allergies or certain forms of oversensitivity and people who are worried are more likely to experience nuisance and accompanying symptoms than others.

Experiencing odour nuisance can hamper behaviour or activities. The most common effects are presumably closing windows and not being keen to be outside or invite visitors round.

The Ministry of Infrastructure and the Environment conducts research into the health effects of odour nuisance. On 30 April 2015 the State Secretary announced that the evaluation of the Odour Nuisance and Livestock Farming Act will pay particular attention to odour standards due to reports of excessive odour nuisance.

A decrease in odour nuisance in recent decades

Odour nuisance is prevented primarily by granting permits. Various local government bodies, in particular the provincial governments, are interpreting the Dutch odour policy in this way at local level. They are all doing so in their own way.

Odour nuisance due to wood-burning stoves and multi-burner stoves

Commercial wood-burning stoves have to comply with the requirements of the Activities (Environmental Management) Decree. This Activities Decree contains general environmental rules for companies, but does not regulate for the prevention of odour nuisance. In the event of odour nuisance, a local government body can take measures, as necessary, on the basis of the duty of care referred to in the Activities Decree. The permit can also oblige users to reduce odour nuisance. If a company does not fulfil its obligations, a municipality or provincial government can impose a fine or penalty.

As regards private wood-burning and the private use of multi-burner stoves no standards have yet been imposed in the Netherlands. It is therefore unclear when anyone using a wood burner or multi-burner would actually be violating a ban. A few rules do provide guidance in this matter. For example, the Buildings Decree [Bouwbesluit] from 2012 states that it 'is prohibited to perform (…) activities which would result in the distribution of smoke, soot, odour, vapour or dust in a manner which would be detrimental or harmful for the environment'.

The Ministry of Infrastructure and the Environment commissioned RIVM to set up the Wood Burning Platform. The aim of the platform is to bring together all the social players in order to collect and exchange knowledge about how the nuisance caused by wood burning can be limited.

When granting and enforcing permits, the competent authority can set an acceptable level of nuisance for odour and impose this on companies and industry. This is done using the 'handbook for determining the acceptable level of nuisance for odour from businesses'. The competent authority uses a step-by-step plan to assess the odour consequences of the activities, verifies the information provided and checks whether the regulations are being fulfilled.

Although a number of odour aspects are regulated in the Activities Decree, the competent authority (the municipality or provincial government) can also impose regulations on the grounds of its duty of care. If a company causes numerous complaints due to violating environmental permits, the provincial environmental protection agency will take legal measures, for example by imposing fines.

The Odour Nuisance and Livestock Farming Act [Wet geurhinder en veehouderij] (WGV) sets standards for the permitted odour burden on the environment. Cattle breeders' operations have to fulfil odour standards which are determined in accordance with the complicated system that takes account of the number of animals, the type of accommodation, the type of animal and the location of the company compared to various types of homes. An imaginary circle is drawn around each farm that causes odour. It is then not permitted to build any new homes inside this 'odour circle'.

If a company causes numerous complaints due to violating environmental permits, the provincial environmental protection agency will take legal measures, for example by imposing fines.

The government is actively involved in finding ways to prevent odour nuisance in the countryside. For example, farmers are encouraged through a subsidy scheme to reduce the detrimental consequences of ammonia emissions from manure through the construction of environmentally friendly green label sheds.

Research by the Municipal Public Health Services into odour nuisance

All odour nuisance maps (as displayed in the Atlas Living Environment) have been produced by RIVM for the situation in the 2008-2010 period. The data comes from the National Public Health Monitor of the Municipal Public Health Services in the Netherlands. This questionnaire survey under 19 and 65 year-olds is also going to be repeated every four years in order to measure health at local level. Not all Municipal Public Health Services asked the question about odour nuisance, meaning that data for some Dutch municipalities is missing.

In order to make sound health policy, insight is necessary into the citizens' health and perception of health. This requires a comparison of that data at regional and national levels and trend analyses. This can be done using the Local and National Health Monitor which contains unambiguous health information collected by Municipal Public Health Services and home care organisations. This gives municipalities, provincial governments and the state an insight into whether the policy being pursued is bearing fruit. The data can also be used as a basis for new policy plans and to establish priorities.

Do you suffer from odour nuisance? Read more

The municipality is, in the first instance, responsible for the living environment and will therefore have to act against odour. You can submit complaints about odour nuisance to your municipality, but you can also contact your provincial government's environmental complaints hotline. You can also opt to report your complaint about odour on Milieuklachten or via the local/regional Municipal Public Health Services.

However, the fact that people experience nuisance does not necessarily mean that violations are being committed. It may be that the company stays within the set legal standards, but that local residents still experience nuisance. A solution will then be sought together with the company and local residents. Neither is it always clear which activity is causing the nuisance. This requires further research in order to obtain a proper insight and to be able to take suitable measures. Insight into the complaints and causes and a joint approach (company, local residents and environmental services/provincial government) into nuisance situations are desirable if we want to create a healthy living environment. Private individuals can, for example, start taking responsibility about how they heat their homes. 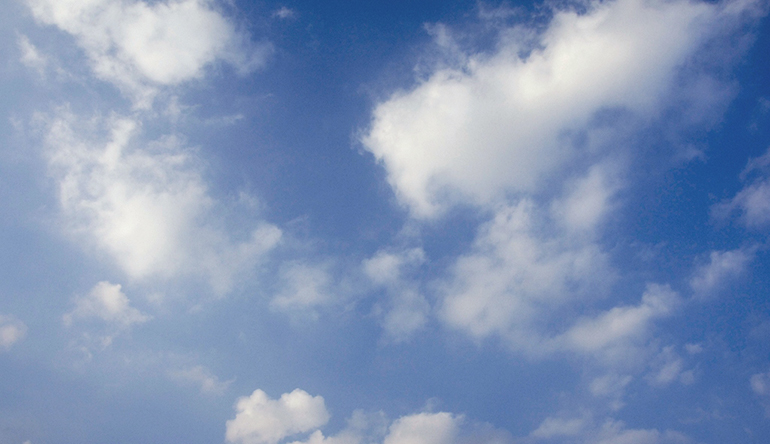