Asbestos is a collective name for naturally occurring minerals which consist of microscopically small, needle-like fibres. In the Netherlands the sale, usage and processing (cutting, drilling, sanding, or dismantling) of asbestos has been prohibited since 1 July 1993 due to the dangers for people's health. Before that time asbestos was frequently used as, among other things, a building material because of its useful characteristics in that it is strong, resistant to wear and tear and high temperatures, insulating and, above all, cheap. The most commonly used sort is white asbestos (serpentine or chrysotile asbestos). Blue asbestos (crocidolite) and brown asbestos (amosite) are also used.

Asbestos was frequently used in the past and it can still be found in older buildings, particularly those built between 1945 and 1993. In the Netherlands well over 80% of the imported asbestos was processed into asbestos cement products (such as corrugated sheets and water pipes). The mineral was also used in brake and friction material, insulation, heat-resistant textiles, in fire-resistant sheets, in carpet underlays and in gaskets and filters in the chemical and foodstuffs industry. It is estimated that asbestos has been used in approximately 3,500 types of products.

Materials containing asbestos have been used a great deal in structures such as factories, public buildings, homes, barns and sheds, as well as in objects such as ships, trains and cars. Asbestos can also be found in roads, private driveways and in the soil.

On the website of the InfoMil Knowledge Centre you will find a general overview of asbestos uses and the Asbestos guide which will give you an idea of where asbestos might be located in and around a house.

If asbestos is not, or scarcely, bonded to a binding agent, as in asbestos spray, or if the binding agent is in a poor state of repair, asbestos fibres may be released. However, many millions of fibres may also be released into the air and be breathed in if the material containing asbestos is dismantled or inexpertly processed (which is prohibited). Examples of how the fibres are released include sanding, drilling, sawing and breaking of materials containing asbestos. Once they have settled, the asbestos fibres are left behind as dust and can be swept up into the air by any activity on the surface they have settled on. Material containing asbestos can also end up in rubble granulate, soil, in or on the ground and/or as dust in people's homes. Consequently, asbestos almost always has to be removed by certified companies. Study the general overview of the current rules for the removing of asbestos.

Inhaling is bad for your health

Asbestos consists of microscopically small fibres. These are invisible to the naked eye. Because the fibres are so small, they can penetrate deep into the lungs if inhaled. Breathing in asbestos fibres can, in the long-term, cause mesothelioma (cancer of the membranes of the lungs, chest wall and, to a lesser extent, the abdomen), lung cancer and pneumoconiosis. Usually there is quite a long period of time between breathing in the fibres and becoming ill, often ten to forty years. By no means everyone who inhales asbestos fibres will get cancer or pneumoconiosis. The chance of getting these illnesses is greater if high concentrations of asbestos fibres are inhaled over a long period of time, as used to be the case in some work situations. The risk of the inhalation of asbestos fibres causing lung cancer increases among people who smoke.

Asbestos is, therefore, dangerous if the fibres are breathed in. Asbestos fibres which enter the body via the mouth from water and food represent almost no danger to people's health. If the asbestos fibres are bonded to a strong binding agent (such as cement), they cannot be inhaled and the risks are extremely small. The risks arise if asbestos fibres are not bonded and can easily enter the air, for example during processing or in the event of wear and tear to products containing asbestos.

The presence of asbestos in school buildings may mean there are risks for children, staff and visitors. Children are additionally vulnerable because, after exposure, they may still live for a long period of time and therefore have a greater risk of developing illnesses related to asbestos. In order to prevent incidents with asbestos at schools and to create awareness, the Dutch House of Representatives decided, in April 2011, to ask all school boards and/or school management teams to assess the asbestos situation in their school building. Asbestos was used in approximately 80% of school buildings constructed before 1994. Asbestos in a school building can be hazardous if it is released from the building and insulation materials, for example during alterations or in the event of wear and tear.

A separate project has been started as well for asbestos in hospitals where central government in cooperation with the Dutch Hospital Association (NVZ) and the Netherlands Federation of University Medical Centres (NFU) carried out a survey to establish how much asbestos is present in hospitals. Hospital management teams are responsible for the health and safety of patients and staff in the hospital. When determining the health risks, an analysis of the risks associated with asbestos is in fact obligatory. Asbestos has been used in many ways in hospitals, for example in fire retardant ceilings and walls and in floors.

Asbestos is regularly found in or on the soil. Just as with other soil contaminating substances referred to in the Soil Protection Act, the assessment as to whether there is an unacceptable risk consists of three stages. Because the properties of asbestos, and with that the method of exposure to humans is different than for other substances, the procedure is described in a separate annex to the Soil remediation circular. If investigations reveal asbestos, measures will have to be taken if work needs to be carried out in the soil.

Use of asbestos prohibited in the Netherlands

Since 1983 a ban has been in place on the production and use of friable products containing asbestos. Since 1 July 1993 all commercial processing of asbestos has been prohibited in the Netherlands. However, asbestos is still present in many buildings and premises which date from before that time. The main focus of the asbestos policy is to prevent exposure to asbestos. In addition, the government is investigating how asbestos can be responsibly removed from the living environment. At the same time municipalities, citizens and companies are being encouraged to comply more with the rules for asbestos removal.

Statutory rules apply to dealing with asbestos. Which rules are applicable depends on whether you come across asbestos within the framework of your profession, company, client or as a private individual. Private individuals who want to remove material containing asbestos have to comply with the Asbestos Removal Decree 2005, the Buildings Decree 2012 and the rules of their municipality. The essence of the Asbestos Removal Decree is that an assessment is made of asbestos and any asbestos remediations in buildings in a responsible manner. In most cases, certified companies have to perform these activities to guarantee optimal safety for the health of employees and residents. If you are confronted by asbestos in a professional capacity, meaning as an employer, employee or independent operator, the Working Conditions Decree is also important.

Intended ban on asbestos roofs as from 2024

The expectation is that all roof coverings containing asbestos, belonging to private individuals, companies or government bodies, will have to be removed as of 1 January 2024. The intended ban on asbestos roofs is intended to take effect after a change in the law. Any roof containing asbestos will, in time, start to exhibit wear and tear due to the influences of the weather, with fibres becoming loose and ending up in the air, where they may constitute a health risk. Rainwater draining off the roofs may wash away asbestos fibres or small pieces of material containing asbestos. This will then lead to the soil being contaminated with asbestos. If a roof containing asbestos is already in very poor condition, the municipality can force the owner to have the roof removed.

Refer to asbestversnelling.nl for initiatives to speed up the process of eliminating asbestos roofs in the Netherlands as from 2024.

The National Asbestos Monitoring System is intended to increase transparency and safety within the asbestos sector, make it easier to complete statutory procedures and reduce the administrative burden. The LAVS is for all the parties involved in the asbestos removal chain and monitors asbestos from the moment of identification until the process has been completed. The LAVS is not intended for private individuals, but can instruct the company to work within the framework of the LAVS on behalf of a private individual. Certified parties have been obliged to work with the LAVS since 1 March 2017.

Because asbestos is such a strong and stable material, storage (sometimes after binding the fibres into a cement mixture) is the only way to process material containing asbestos. In principle material containing asbestos has to be stored indefinitely and that will, of course, take up useful space. In order to avoid this, various studies are being carried out into how to destroy asbestos fibres and convert them into non-harmful residual substances. The process involves the destruction of the fibre structure of asbestos on the basis of mechanical, thermal or chemical techniques, or a combination of these. By destroying the fibre structure, the material containing asbestos will no longer be reactive and will be usable as an asbestos-free, secondary raw material, meaning that it does not have to be dumped. The Flemish government has described a number of these techniques in more detail.

Material containing asbestos often has a fibrous structure. This is visible wherever the material has been broken or damaged. Asbestos usually has a white to light grey colour. If you want to know for sure whether certain material contains asbestos, you must have it investigated by a specialist laboratory.

In almost all situations asbestos has to be removed by a certified company. First of all an assessment has to be made and a notification sent to the municipality. In some strictly described situations, the asbestos can be removed by expert companies which are not certified. In a limited number of cases a private individual can himself remove the material containing asbestos. The best known example is the removal of a maximum of 35 m2 bonded, screwed down sheeting material. Such instances must also be reported in advance to the municipality. The municipality can then tell you whether you are allowed to remove this material yourself or that you have to call in a (certified) company.

Violation of these regulations is a criminal offence and substantial fines can be imposed. The relevant rules are stated in the Asbestos Removal Decree 2005, the Buildings Decree 2012 and the Working Conditions Decree. 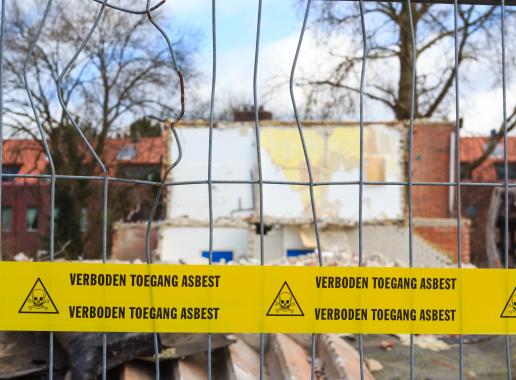