People spend an average of 85% of their time indoors and 70% of that time is spend in their own home. The fact that so much time is spent indoors means it is important that this space is also healthy. This means paying attention to things such as substances in the air, the humidity and the amount of radiation. All these aspects fall under the banner of indoor environment. The indoor environment is influenced by, among other things, the type of building, the building materials, the layout, ventilation, location (groundwater, position of the sun), the number of residents, their behaviour (smoking, hobbies, pets), the weather and the outside air. There are various hazardous substances which are released in the indoor environment. In the event of insufficient ventilation these substances accumulate and that leads to concentrations which are often higher indoors than outside.

Chemical substances can end up in house dust due to, for example, wear and tear to products and contamination being brought in from outside. Examples include metals, flame retardants, plasticisers, polycyclic aromatic hydrocarbons (PAHs) and asbestos. Other substances may be released during processing or usage indoors. Volatile organic compounds (VOCs) can be released when you use cleaning agents and paint.

Moisture and mould issues occur primarily in homes which were built before 1992. Moisture in buildings is not necessarily found only in the air, but can also be present in building materials, furniture or plasterwork. The things that people do in their homes have a significant effect on the amount of moisture indoors. This means activities such as cooking, using the dishwasher, showering, washing/drying clothing, as well as breathing and sweating. A consequence of excessive moisture in the home is accelerated mould growth, as a result of which people can start suffering from respiratory complaints or allergies.

Allergens are substances which can cause allergic reactions. In the indoor environment allergens come from house dust mite, pets/animals, mould and pollen. Of the issues that the Municipal Health Services have to deal with, 10% relate to mould and moisture issues in homes.

Radon is a radioactive gas that is naturally released from the soil. It is also present in building materials such as concrete, bricks and natural stone. Radon therefore occurs naturally in the indoor environment. Because radon is radioactive it decays to form other versions of radon. These versions (which are also referred to as decay products) can bond with dust particles and can therefore also be inhaled. Once they have been inhaled the particles release radiation into the body and that can result in lung cancer. The concentrations in Dutch households are generally well below the EU guidelines for radon. The average concentration is 13.5 Bq/m3 air and the guideline concentration is 400 Bq/m3.

Particulate matter can also be released indoors. The main source is tobacco smoke. In addition particular matter is released when cooking, using an open fire and when hoovering.

A number of the chemical substances released indoors can be inhaled by people or absorbed via their skin. In the body they can lead to short and long-term health effects, such as irritation of the skin, eyes or airways and they can also disrupt the development of the central nervous system and lead to (lung) cancer.

Volatile organic substances (VOS) generally have an inhibiting effect on the central nervous system. In the event of an increasing dosage this is expressed in, for example, headache, lethargy, dizziness and unconsciousness.

Moisture and mould in houses and buildings increase the chance of airway-related problems such as sneezing, coughing and wheezing. People who suffer from asthma may find that exposure to moisture or mould in their home can worsen their symptoms.

Exposure to allergens, such as house dust mite and mould, can also cause allergic reactions and an allergy. On the other hand, if young children are exposed to this type of allergen, they may actually become more resistant and suffer fewer allergy-related issues.

Radiation from inhaled radon decay products damages lung tissue and this increases the risk of lung cancer. The level of risk of lung cancer depends on the time and extent to which someone is exposed to radon. There is no threshold value under which the chance of lung cancer is zero. (Passive) smokers run an additional risk because smoking means that more dust particles are released into the indoor environment to which decay products can attach themselves and because the harmful health effects of tobacco smoke and radon are mutually reinforcing.

If someone inhales carbon monoxide, there is no space left for the body to absorb oxygen into the blood. As a result the blood becomes slowly saturated with carbon monoxide and the person's body slowly shuts down. The initial symptoms are headache, tiredness and dizziness. A high concentration of carbon monoxide can lead to unconsciousness and death.

The benefit of a healthy indoor environment

Scientific studies of the indoor environment focus largely on the indoor environment in schools and use carbon dioxide as a criterion for quality. We exhale carbon dioxide (CO2) and that means that the concentration of carbon dioxide in a particular space increases rapidly if it is not ventilated. Research by the Netherlands Organisation for Applied Scientific Research (TNO) has, for example, shown that students perform better if spaces are actively ventilated and CO2 concentrations remain low. What is more it transpired that Danish pupils who slept in a bedroom where the window was open and where there was plenty of fresh air were more able to concentrate the following day.

The Buildings Decree 2012 contains a number of regulations which can be used to assess the health aspects of a particular building. For example there is a description of how a building must have an external partition construction to prevent noise. It also contains descriptions of how internal and external partition constructions must comply with certain air and water tightness qualities, that it must be possible to ventilate rooms and facilities properly and that a certain amount of daylight has to be available.

Various Municipal Health Service guidelines have been drawn up for the indoor environment, including the Healthy housing construction (2007) guidelines which define measures aimed at:

It is important to ventilate regularly and properly in order to remove moisture, chemical substances, radon and combustion products from buildings. You should make sure there is a constant supply of fresh air via open (tilt-and-turn) windows and/or ventilation grilles and that air can flow through your house via space under internal doors or grilles in internal doors and walls.

You should also ensure that geysers, boilers and central heating boilers are regularly serviced. If you have a chimney, you should have it cleaned at least once a year.

In order to counteract mould and moisture problems indoors, a humidity level of between thirty and seventy percent is advisable. Indications of excessive moisture indoors include condensation on windows, rotting wood or a musty/dank odour. Mould on smooth surfaces is easy to remove. When cooking, turn on the extractor fan and/or open a window in the kitchen. When showering you should make sure there is sufficient ventilation to reduce the level of moisture in your home. Moisture indoors will evaporate more quickly if you regularly turn on the heating.

Because radon naturally occurs in concrete, bricks and natural stone, alternative building materials such as wood, glass and steel, can also be used, in addition to ventilation, to reduce radon concentrations indoors. Special CO alarms which go off in the event of an excessively high concentration of carbon monoxide are available to detect acute problems with carbon monoxide (CO).

When choosing a (mechanical) ventilation system, you should make sure that it does not make too much noise. Otherwise, noise pollution will be a problem. 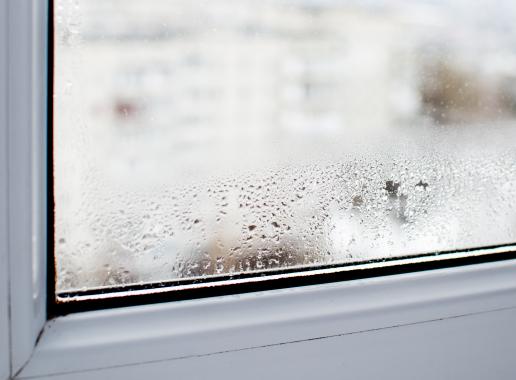