Anyone who spends any time in green spaces can end up with a tick bite. It can even happen in your own garden. Although a bite is usually harmless, a tick may be infected and can be a carrier of Lyme disease. If you have been bitten by a tick, get rid of the tick as soon as you can.

If the illness is not discovered on time, it can have serious consequences. It is therefore a good idea to protect yourself. Checking your body for ticks - and possibly other people's as well - will ensure that any ticks are quickly removed. Indeed, the longer the tick stays in your skin, the greater the chance of it transferring pathogens.

The website Tekenradar.nl has more information about how best to protect yourself. You can also register on the site for further examination if you have been bitten by a tick or if you see a red circle on your skin after a tick bite.

You can also see how many people went to their GP with a red ring on their skin in 2014.

Most people do not become ill

Lyme disease usually starts between three days and three months with a red ring or blotchy skin rash around the area of the bite. This area usually enlarges within a couple of days and turns a lighter colour in the middle. The person who has been bitten may also exhibit flu-like symptoms.

Although a red ring or mark on the skin is a sign of Lyme disease, no ring or mark is visible in 15% of infections.

More serious symptoms can occur at a later stage, such as paralysed facial muscles, severe pains in the arm or leg, seeing double, ear problems, loss of leg strength, painful or swollen joints or a tendency to faint. If Lyme disease is not discovered on time, the victim can exhibit neurological complaints, chronic skin disorders or serious pain in their joints.

If you experience any symptoms, all you need to do is make an appointment with your GP. Lyme disease can usually be treated very effectively with antibiotics. People cannot infect each other with this disease. Even if you remove a tick, you may still be in danger of becoming infected.

A lot of small rodents and other animals (mice, rats, hedgehogs) and deer, as well as cows, sheep and dogs may be carriers of the Borrelia burgdorferi bacteria. They do not transfer the bacteria to people themselves (not even by biting). Instead, ticks that suck the blood of these infected animals absorb the bacteria into their bodies along with the blood. When a tick later sucks the blood of a person the bacteria has an opportunity to transfer from the tick to the human.

Before you go outside

Before you go off into the countryside, you should check the Tekenradar.nl website to see where tick activity is expected. The more activity there is, the greater the chance of being bitten by a tick and the more crucial it is to check for tick bites.

Cover your skin, wear enclosed shoes and put your trouser legs into your socks. You can also apply insect repellent to your skin which contains at least 30% DEET. This helps keep ticks at a distance. You can buy this kind of insect repellent from drug stores and pharmacies. Read the instructions on the packaging. Some people's skin may be sensitive to DEET. In order to avoid any skin problems, DEET can be applied to shoes, socks and the lower section of your trouser legs.

Once you are outside

Keep to the paths as much as possible, avoid contact with bushes, fallen leaves and shady areas of tall grass.

Once you have come back indoors

The most important advice after you have been outdoors in green areas is to check your clothing and body properly for ticks. Above all you should check warm and moist areas such as your groin area, the backs of your knees, your armpits, your head and behind your ears. A tick can attach itself to anywhere on your body.

What should you do after a tick bite? 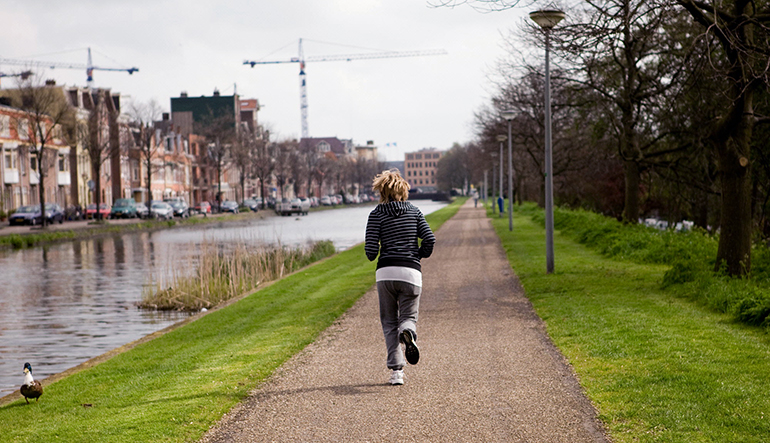