All sports fields, flowerbeds, nature areas, public gardens, parks and gardens contribute to ‘the green experience’ in your living environment. In this theme we primarily assess the greenery in the neighbourhood. This may be in the town or city, in a village, in an agricultural area or in a suburb. A green living environment is important for relaxation, for walking or cycling, games, sports, or for meeting other people. It is therefore important to have parks, playing fields and public gardens in the neighbourhood which are easily accessible. Combining the trees, shrubs and low vegetation maps gives you a complete picture of where you can find green spaces in your neighbourhood.

When it comes to daily usage (games, relaxation and sports) it is important that public green areas (parks, woods, nature reserves and areas for daily recreation) are available within a distance of 500 metres from people's homes. Recent European research even recommends a maximum distance of 300 metres to urban greenery covering a minimal area of 1 hectare. The target figure that the central government recommends to municipalities in the Spatial Planning Memorandum for new-build locations is 75 m2 greenery per property.

The availability of greenery in the environment differs considerably per region. In Friesland and Zeeland, the river district, Noord-Limburg and Zuid-Limburg the distance to public greenery is greater than the national average. Flevoland, Rotterdam, the Veluwe and large parts of Noord-Holland actually score above average. The average distance to the closest park or public garden is 1 kilometre. This may be a park or public garden, but also an open natural area or woods.

A green living environment is a more attractive place to live. A row of trees in a street, cheerful flowerbeds in a neighbourhood, or an attractive park in a busy town or city are more pleasing on the eye than barren surroundings featuring only stone buildings. However, it is not only more attractive to live in green surroundings, it is also healthier.

Large-scale research into the health perception of around a quarter of a million Dutch people revealed that people who live in a green residential environment feel healthier. This applies both to urban and rural areas. What is more, both agricultural greenery and urban greenery are positively related to people's health. The relationship between the amount of greenery in the residential environment and health is slightly stronger for people with a low socio-economic status compared to people with a high socio-economic status and for young people and old people in comparison to adults aged between 25 and 64 (source: Vitamin G research 2006).

People in a green environment not only feel healthier, they actually are healthier as well. Research involving 345,000 Dutch people revealed that people who live in a green environment report health issues to their GPs less frequently. They also suffer less from anxiety disorders and depression. For example, the chance of depression is 1.33 times greater in neighbourhoods with little greenery compared to neighbourhoods with lots of greenery.

The quality of green spaces is important

People suffer fewer acute health-related complaints and experience a better general and mental health if they live in a neighbourhood in which a large quantity of greenery is combined with a high quality of greenery (source: Vitamin G research and recent research). In order to achieve an optimal health benefit, therefore, criteria for the quality of green spaces must also be imposed in addition to green standards.

Exercise only plays a role for adolescents

Recent research has revealed that people generally exercise more if they live in a neighbourhood with lots of green spaces. However, other research has shown that a green neighbourhood actually has no effect on exercise (source: Vitamine G study and Vitamine G2 follow-up study). In those studies it appeared that young adults between 12 and 17 years of age, also fulfil the physical activity standard more frequently if they live in areas with more green spaces.

Social cohesion plays an important role in explaining the relationship between green spaces and health. People in a green residential environment do not appear to have more contact with their neighbours than people in a less green environment. However, they do feel less lonely and experience a lack of social support less often. Moreover, people with a lack of social contacts and support have poorer general health, more health issues and poorer mental health. Green surroundings also help to reduce stress.

Lessons for policy: increase the health function of greenery

The lessons which we can learn from research is that the greatest added value of green spaces for health lies in the reduction of stress and the fostering of social cohesion in the neighbourhood. Measures to increase the health function of green spaces should therefore focus primarily on these mechanisms, for example by locating benches under trees or by organising events in the local park. When organising the living environment, account should be taken not only of the minimal standards of local green spaces, but also of the quality of the green space.

Researchers from the Wageningen U&R are therefore going to investigate and explore the relationship between nature and health in more detail within the framework of the Effect of nature on health dossier.

The provincial governments are responsible for the green spaces around towns and cities and villages. The provincial government implements the landscape policy. It is their task to provide sufficient green space in and around the towns and cities. Among other things this means the management and linking of nature reserves, maintaining woodlands, protecting the flora and fauna and investing in sustainable agriculture.

Municipalities are responsible for the establishment and maintenance of all public green spaces in the towns and cities and villages. This includes the public gardens, public areas of green, greenery in pots (ornamental green spaces), verges, parks, as well as ponds, ditches and water features. A number of municipalities have set up subsidy schemes which homeowners can use to create green roofs. Municipalities are also collaborating on policy for green roofs in the Green Roofs Green Deal.

A renewed approach to managing public green spaces involves citizen participation. This means that residents and neighbourhoods look after local green space. This form of green management increases the social cohesion and the development of an individual identity for the street and the neighbourhood.

Add green to your garden, balcony or street

As a local resident, you can yourself contribute to making the living environment greener. You can start with your own garden. Less stone and more greenery will attract bees, butterflies and birds, reduce flooding, increase cooling and improve the neighbourhood's image. Under Operation Steenbreek you will find information and advice about a nature-friendly garden.

If you do not have a garden, you can create a façade garden, plant flowers and plants around the base of a tree or add greenery to your balcony. That will make your street look a lot greener and more inviting.

In the Netherlands, there are numerous initiatives set in nature and in the green living environment to enhance people's physical, mental and social health. The 'In green spaces is better' online platform provides access to these initiatives for citizens and professionals. At Beter in het groen visitors can search for these initiatives locally on the basis of postcode or place name. The opportunities vary from walking with a coach, running therapy and local health gardens to exercise programmes in the woods. 'In green spaces is better' makes it easier to find activities for potential participants, as well as for schools, carers, doctors, nurses and other health professionals.

The Institute for nature education and sustainability (IVN) is working to provide access to nature and nature-related experiences to all people in the Netherlands, including vulnerable groups such as the elderly in nursing homes. We are doing this by means of scientifically proven green interventions and cooperation in the care sector, such as grey, green and glad.

Participation means that residents can inform the municipality of their views with regard to a certain plan. This can take place in writing or verbally, for example at a hearing. It is an opportunity for you to discuss spatial (green spaces) plans with your municipality. The spatial plans are published in the local newspaper or you can read them at Ruimtelijkeplannen.nl. In a number of cities and municipalities you can join neighbourhood committees who advise the municipality on request or voluntarily. The citizen initiative is a way for you to place a certain issue or proposal on the municipal council's agenda.

Complaints or requests about green spaces?

If you have a complaint or request about maintaining the quality of public green spaces, please contact your municipality or submit your message via Improve the neighbourhood.

What can the municipality do?

As municipality you can opt to provide sufficient green spaces when designing streets and neighbourhoods. You can manage existing green spaces using natural methods. You can find more information on this in the Atlas of Natural Capital under Green in the city, like: design and construction of a green city and managing a green city. The green map of the Netherlands provides an excellent insight into the location of green spaces in the Netherlands (resolution 10m).

You can also find inspiring ideas in the Healthy Design Guide. When planning and managing green spaces it is important to involve local residents. This can be done, for example, through organised consultation groups, citizen panels or digital consultation rounds. You can also use the activities package from Operation Steenbreek. At Wageningen University you can share knowledge with the Green citizen participation learning community.

You can stimulate the construction of green roofs and façade gardens by providing subsidies. 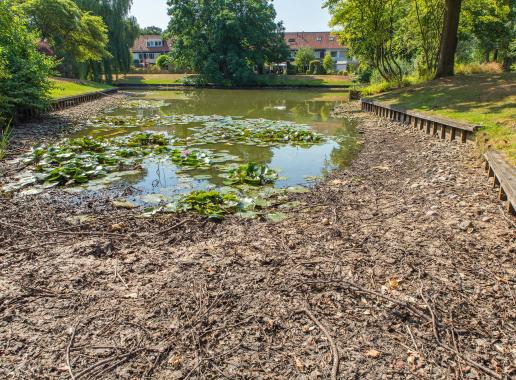