Air traffic is in third place when it comes to noise pollution in the Netherlands. Road traffic is at the top of the list, followed by noise caused by neighbours and then noise pollution caused by airplanes. There are various types of airplane noise. The frequent taking off and landing of airplanes from a large commercial airport can cause almost continuous noise pollution. Jet fighters cause intense noise for a short period which can also startle people. Military helicopters can disturb conversations or make them impossible for a short period of time and advertising planes can be a source of annoying noise in the background.

By far the majority of aircraft noise is permitted noise

In more or less all instances in which people experience noise pollution by airplanes, it will have been caused in a permitted situation. Air traffic simply produces noise. At regional airports (such as Teuge near Apeldoorn, Hoogeveen, Hilversum or Ameland), the noise volume is generally limited. At so-called 'airports of national interest', the frequency of take-offs and landings is much greater. By this we mean the airports at Eelde, Lelystad, Maastricht, Eindhoven and Rotterdam. The airplanes that fly to these airports are larger than the ones that fly to the regional airports and they therefore make more 'noise'. It is so busy at the Dutch national airport (Schiphol) that there is almost continuous noise during the day.

There are also gradations at regional airports. For example, some are used for recreational flying, others are heliports (including a number of hospitals) and others are locations where air traffic is permitted to take off and land occasionally, based on a dispensation from the provincial government. Examples of such flights are sightseeing flights during annual fairs or helicopters used as taxis.

The Royal Netherlands Air Force deploys personnel and equipment for peace and safety missions at numerous locations around the world. The fleet consists of a mix of fighter and transport aircraft, fighter and transport helicopters and training planes. In order to operate this fleet of aircraft, the Royal Netherlands Air Force has seven airports and one maritime airbase from which training and operational flight operations can be carried out. These are: Leeuwarden Airbase, De Kooy Naval Airport (which also serves as a civilian airport under the name Den Helder Airport), Volkel Airbase, Eindhoven Airbase, Deelen Military Aerodrome, Gilze-Rijen Airbase, Woensdrecht Airbase, and De Peel Air Force Base.

Military pilots have to practise in order to keep their skills up-to-date, for example by undertaking low flying exercises and night-time flights. This may also cause noise pollution. The military tries to limit this wherever possible. For example, all military airbases have noise zones for their take-off and landing runways, similar to those applicable in civil aviation.

The Netherlands has legislation and regulations which are intended to reduce the noise pollution produced by air traffic. Threshold values, noise contours are being used as enforcement points. Although these methods are different, they still have the same goals:

This Atlas contains two maps which can be consulted on air traffic noise. There is a map with the average noise exposure of the air traffic around Schiphol (2016) and there is a map showing the percentage people suffering serious inconvenience due to noise from aircraft (from 2007).

What does the nuisance consist of?

Noise in our residential environment causes mainly inconvenience and sleep disturbance. In the event of long-term noise pollution it is difficult to find rest and relaxation. Continuous stress and sleep disturbance can lead to high blood pressure and cardiovascular diseases. It may lead to a deterioration in the health of people who already suffer from cardiovascular conditions. If children are exposed to noise at school, their performance may suffer.

Legislation and policy have been drawn from various sides to restrict noise pollution by air traffic. These are European rules, national legislation and provincial policy. The trend for Schiphol is shifting from standards to consultation. Although the focus is still on enforcement points around the airport which have to be monitored, in the foreseeable future the switch will be made to rules governing runway usage. The following paragraphs deal with all the legislation and regulations which apply to the various types of airports.

The government has set limits for the noise pollution which an airport (large or small, civil aviation or military) is permitted to cause. A distinction is also made between airplanes in the air and on the ground. On the ground, the airport site is regarded as an industrial estate. All the noise-producing equipment on the ground, including the airplanes which have their wheels on the ground, has to fulfil the roles in the Noise Abatement Act.

Aircraft in the air; Aviation Act

The unit that the air force used to use for noise exposure was the so-called 'Kosten' unit (Ku). This noise abatement unit is still being used at military airfields and is determined by the total of all flight movements during a period of one year. The contours displayed are: 35, 40, 45, 50, 55, 60, 65. In the case of military airports there are no homes and other noise-sensitive buildings within the 65 Ku contour. The usual (current) unit for noise exposure is Lden and is used for civil airfields. Lden means 'Lday-evening-night'. This unit gives the average noise exposure during an entire day, in dBA. The Lden calculation attaches more weight to the evening exposure than the daytime period and more weight is also attached to the night-time exposure than the evening exposure.

Noise pollution can be restricted by setting limits on flight altitudes. The lower an airplane flies, the more noise will be heard. The permitted minimum flight altitude for all flights over a built-up area is 1,000 feet (approximately 300m) above the highest point (for example a church tower). Outside the built-up area the minimum flight altitude is 500 feet (approximately 150m) above the highest punt. In certain circumstances airplanes may be allowed to fly under these minimum altitudes. The pilot then has to have a low-flying permit. Such a flight then has to have a social purpose, for example a police flight, verification flights to assess environmental violations, flights to take photos in order to check the gas network or to perform bird counts by the National Forest Service in the Netherlands [Staatsbosbeheer].

Every now and again the military has to practise low-flying as a way of keeping under the enemy's radar. Special low-flying routes and areas have been designated for these exercises.

Eelde, Lelystad, Maastricht and Rotterdam airports fall under the responsibility of the Ministry of Infrastructure and Water Management. Eindhoven airport (used by military and civilian aircraft) falls under the responsibility of the Ministry of Defence. These airports must comply with the Noise Abatement Act and the Aviation Act. If the noise standards, enforcement points or security risks of the airport exceed certain limits, the provincial government can draw up an airport decree. If no limits are exceeded, (simpler) airport regulations will be needed. A provincial government can grant a dispensation for locations that do not have an airport, but where aircraft can occasionally take off and land.

Lelystad and Eindhoven now have an airport decree and the airport decree for Maastricht is being prepared. The Civil Airports Decree stipulates what an airport decree has to contain in any event as regards noise pollution. These are three noise contours: those of 48 dB(A) Lden, 56 dB(A) Lden and 70 dB(A) Lden. Chapter 3, Article 12 states what the consequences are for the regional airports of those die contours in terms of building. Eindhoven military airport is still subject to the (older) contours defined as 'Kosten' unit or KE.

Our international airport must comply with the Noise Abatement Act and the Aviation Act. The European Environmental Noise Directive has been integrated into the Noise Abatement Act. The purpose of the Directive is to prevent, avoid or reduce the harmful consequences (including nuisance) of exposure to environmental noise. The fact that this Directive has been incorporated into our legislation, means that the Ministry of Infrastructure and Water Management is obliged to draw up noise exposure maps for Schiphol, determine plans of action regarding noise exposure and organise the provision of information and communication regarding the noise exposure. In order to organise implementation properly, the ministry has drawn up the Environmental Noise Guidelines.

An Airport Traffic Decree is a decision under the Aviation Act which records the threshold values for noise, external safety and emissions and the rules for runway and airspace usage, the runway availability and the emission of substances which cause odour nuisance. Schiphol is the only airport in the Netherlands to have an Airport Traffic Decree.

Airports with an airport traffic decree have a number of enforcement points in a wide circle around them. A certain maximum noise exposure may not be exceeded at those points.

Renewal via the Alders Consultation Platform

From 2013 to the beginning of 2014 an experiment was carried out with the new noise system for Schiphol. This involved using the take-off and landing runways which produced the least noise pollution for the surrounding area. This was one of the agreements which the state, the aviation sector, residents and regional administrators made via the so-called Alders Consultation Platform in 2007. In 2015 the Alders Consultation Platform was succeeded by the Schiphol Area Council.

If you have a complaint about noise pollution caused by military aircraft, you should report this to the Ministry of Defence. From the Netherlands, you can call a free number: 0800-022 60 33. If you would rather call the local airbase directly, you can find the telephone number on the website of the Ministry of Defence. You can also fill in the online complaints form. The Noise Pollution Office at the Ministry of Defence is responsible for investigating and responding to complaints, noise measurements, policy relating to low flying areas and enforcing take-off and landing procedures.

On the basis of the Aviation Act a whole range of Environmental Hygiene Consultation and Information Committees (COVMs) have been set up for military airports. These make sure that air traffic does not cause greater noise exposure than is permitted according to the set noise contour(s). Any citizen who wants to submit a complaint about noise pollution can do so to the aforementioned bodies. The COVM gets involved if citizens do not agree with the response to a complaint.

You can also submit your complaints and comments concerning noise pollution by air traffic to the following organisations which are grouped per province. 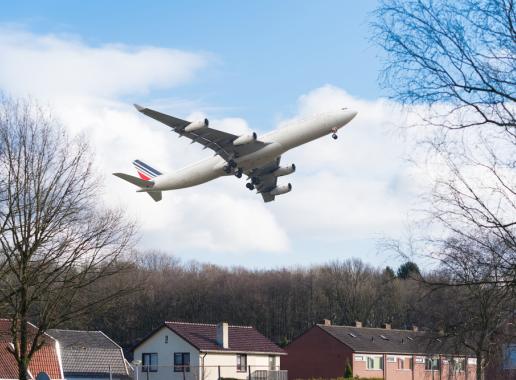 The information on this web page has to be updated. This means that some information could be outdated. You can visit the Dutch page air traffic for up-to-date information.