The Netherlands is not a country of volcanoes, avalanches, tsunamis, hurricanes or serious tornadoes. However, some threats do need to be taken into account in our country. The dangers with a natural origin which we deal with here concern extreme weather, wildfires and earthquakes. For background information about water nuisance and floods we refer to water nuisance and water safety.

In our country we are used to changing weather conditions. Sometimes the meteorological circumstances are exceptional and lead to serious problems. Heatwaves, cold snaps, thick mist, snowfall, high winds, thunderstorms and heavy rainfall can cause problems if they occur on a large scale. These problems include traffic hold-ups (both on the road and on the railways and at sea), damage to houses and vehicles losing their loads. Every now and again extreme weather will result in personal accidents, for example if someone is hit by flying debris or injured during traffic accidents.

A wildfire is a fire fuelled mainly by vegetation. Such a fire can occur in any area where there is dry vegetation available, such as forest, heather, grass, reed and dune vegetation. Villages and residential neighbourhoods/centres which are located in or near countryside areas such as these may then be at risk. Wildfires occur in the Netherlands quite regularly. Usually they are small in size but, every now and again, we experience larger and uncontrollable wildfires.

The Netherlands has experienced relatively mild earthquakes. That is because the Netherlands is not located at the edge of a tectonic plate. Nevertheless earthquakes are a regular occurrence in our country. Initially that was mainly the case in the vicinity of the province of Limburg. Since 1986 there have also been earthquakes in Groningen and Drenthe. These are due to the gas extraction activities in Groningen.

An earthquake is caused by the vibrating or jolting displacement of the earth's crust. Most of them are (almost) imperceptible, but some earthquakes have more far-reaching consequences. During an earthquake you can feel the ground vibrating to varying degrees and they can last several seconds. Often they are accompanied by a loud banging noise and will cause objects to move or fall over. Earthquakes can also cause broken windows, as well as damage to buildings and infrastructure such as roads, sewers and cabling.

Thunderstorms can take place during rainfall, and then certainly in the summer. The heaviest showers may also contain hail and severe to very severe gusts of wind. During such hail and thunderstorms it is better to stay indoors. On average 1 to 2 people are struck by lightning in our country every year. Large hailstones and heavy gusts of wind can destroy crops, sheds and sometimes even houses.

During hot summer periods, overheating and heat stroke are also possible, certainly in the case of untrained people who engage in physical activities. The elderly and children are generally more sensitive to high temperatures than other age groups. Hypothermia can occur both in the summer and in the winter. In the summer, unexpected thunderstorms on a hot day can cause temperatures to drop considerably. Wet clothing in combination with the drastic decrease in temperature can have dangerous consequences. The same applies to a poorly dressed walker who ends up in a sudden snowstorm.

Mist and iciness can result in a greater chance of accidents on the road.

A wildfire may surprise visitors to a particular area and may surround them. During a dry period, a wildfire can develop quickly and unpredictably. The impact of an uncontrollable wildfire can be huge. All kinds of people (residents, visitors, employees and members of the emergency services) may be exposed to the fire itself, or the smoke it produces.

The most serious earthquake in the Netherlands took place on 13 April 1992 and had its epicentre near Roermond. It measured 5.8 on the Richter scale. Earthquakes in our country generally measure 1 or 2 to a maximum of 4 on the Richter scale. The damage caused by the most serious earthquakes generally consists of cracks in walls, jammed doors, broken gutters and defects to sewers and other pipelines.

Another form of damage is mental damage. A lot of the people who suffered earthquake damage to their house no longer feel safe or at ease in their home. Damage can, therefore, lead to health issues. People who live in the province of Groningen who have suffered damage on several occasions as a result of gas extraction are likely to suffer one and a half times more from sleeplessness, irritation, concentration problems and physical issues than people in the same province who have not suffered damage. Well over 4,000 residents from throughout the entire province answered questions about their appreciation of their living environment, their experience with earthquakes and reporting damage, their feeling of safety and psychological and physical health. The National Coordinator for Groningen was commissioned by the University of Groningen to work on this together with, among others, the Municipal Health Service and the Security Region. The complaints which occur among 14 percent of residents of the province of Groningen with multiple damage are irritability, abdominal or stomach problems, muscle or joint problems, palpitations, or negative feelings such as depression or a lack of control over their lives.

During periods of extreme weather conditions the municipality will coordinate the emergency services. In the event of a major impact, the Security Region will take control. The municipalities and Directorate-General for Public Works and Water Management [Rijkswaterstaat] are responsible for winter maintenance of the roads, while Prorail is responsible for ensuring that platforms and railways are accessible.

RIVM and the Royal Netherlands Meteorological Institute draw up a national hot weather plan together with other parties. They use it to inform care institutions quickly about the risk of a long-term period of hot weather so that measures can be taken on time.

A wildfire requires good cooperation between the fire brigade, municipalities, the Ministry of Defence, site managers, leisure industry businesses, farmers, machinery contractors, the police and medical services. This is all coordinated by the Security Region.

The Royal Netherlands Meteorological Institute registers all seismic activity in the Netherlands. Warnings are not given. However, all warnings are translated into seismograms and ShakeMaps.

Although you can insure yourself against the consequences of natural risks, you should check the policy conditions carefully to see what is and is not insured. For example, you have to have properly maintained your possessions.

In the event of heat

In the event of thunderstorms

In the event of a wildfire

In the event of an earthquake 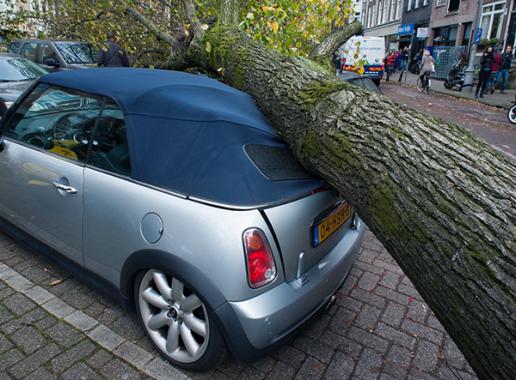