The soil may also have been fertilised by manure and excrement from infected farm and wild animals. Unpurified or insufficiently purified waste water may also have a detrimental influence on the microbiological quality of the soil and this may lead to risks for humans. The excrement may contain eggs of the Toxocara canis roundworm (dog parasite) which can cause diseases among children. People may also become ill due to a toxoplasmosis infection via cat excrement.

If chemical substances in the soil or the groundwater represent major risks to people's health or soil life or are likely to be distributed via the groundwater, this may be a reason to tackle a contaminated location in an operation referred to as remediation. At its peak, in 2004, there were 650 thousand seriously contaminated locations. Since then most of these locations have been investigated. Often there was no evidence of serious soil contamination. Remediation was performed in a total of thirty thousand cases at locations with so-called urgent soil contamination. This involved the contamination being removed or isolated. In the Soil and Substrate covenant government bodies agreed that the remaining 1,400 locations with urgent soil contamination will be remediated and/or controlled by 2020.

Bodemloket provides a map of the Netherlands showing where historical activities may have resulted in contamination of the soil and groundwater. It also shows where research and remediation have taken place.

Damage to health in the event of exposure

Living, working or recreation at a location with soil contamination almost never results in serious health problems. That is because insufficient quantities of these chemical substances from the soil actually enter people's bodies ('exposure'). However, contaminated ground can make illnesses more likely if we come into direct or indirect contact with contaminated soil or products which come from the soil. This could happen during gardening or digging work.

The state, provincial governments and municipalities, including the Municipal Health Service, are working together to assess chemical soil quality and cooperate if the risks are excessive and action has to be taken (in the form of a soil remediation operation). The research institutes play a role in the development of the required instruments. The consultancies generally carry out the soil investigation which involves, for example, taking and assessing soil and groundwater samples.

In the first instance the party that has caused the soil contamination is held responsible. This means that it has to pay for the investigation and any remediation work. Often, several parties are responsible for an incidence of contamination and in many cases no one will know who actually caused it. The government only pays for the soil to be made suitable for use if no party can be held accountable.

Chemical substances that have been detected are not always a problem and therefore do not, by definition, have to be removed. A risk assessment can be carried out to check whether, at a contaminated location, and excessive risk actually exists in terms of damage to people's health, effects on the soil ecosystem and the spread of substances via the groundwater. A standard instrument is available to do this, namely the decision support model called Sanscrit. Certainly if there is less intensive contact with ground and with products from the ground, for example, as on an industrial estate, the presence of chemical substances can often do little harm. 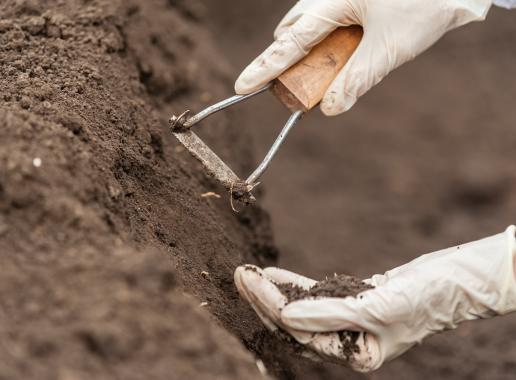 Soil quality map in municipalities in the province of Gelderland