The Netherlands is a land of water. No matter where you might be in the country you will not be far from a river, a stream, a canal, a pond or a ditch. That water is used for all kinds of things, for example drinking water, transport, recreation, agriculture and fishing and as cooling water in industry.

The availability of sufficient, clean and healthy water is crucially important for people and nature. The quality of the surface water, groundwater, drinking water and bathing water affects the health of people and the environment. Conversely, economic and recreational activities by people have an effect on the water quality.

Water can also cause nuisance or danger. More and more frequently so much rain falls during downpours that the sewer cannot cope with the amount of water. Streets, tunnels and houses can then be inundated. We refer to this as flooding. Floods occur when water flows onto the land from the sea or from rivers and canals. They can have major consequences for people and for the economy.

However, a shortage of good quality water will also lead to damage, for example in agriculture and horticulture, the shipping industry and nature conservation.

People and nature need sufficient good quality water, for example as drinking water and water for the agriculture or recreation.

Water in the neighbourhood

Water can have a relaxing and cooling effect. For that reason municipalities create areas of water in residential neighbourhoods and every year the provincial governments designate official bathing water locations where it is safe to swim. Large numbers of people engage in leisure activities involving water, such as water sports or fishing.

Too much or too little water

The Netherlands is low-lying country. Floods are a real risk, and could have huge consequences for people and the economy. The Netherlands has strict standards for dykes and sea defences. The chance of flooding is small. However, some downpours can lead to flooding and in some neighbourhoods (dirty waste) water may flow into the streets, gardens or houses.

Long-term drought can also lead to damage to nature and agriculture.

Government bodies that are involved in water management

The Water Act details the responsibilities of the various government bodies which are involved in water management. These are

The central government is responsible for national policy and national measures. The state is also responsible for the water safety standards which apply to the primary sea defences. These sea defences are the dykes and dunes which protect the country against water from the sea and the large rivers.

Rijkswaterstaat (RWS) is responsible for implementing the management tasks on behalf of the central government. Rijkswaterstaat manages the large areas of water, such as the sea and the rivers. RWS has to warn the responsible government bodies in good time about high water or storms at sea. In addition, RWS is responsible for maintaining some of the dykes, dams, barrages and storm-surge barriers. RWS also protects the coast and ensures there is enough space for the rivers, for example by excavating the floodplains and creating additional gullies.

Water boards are responsible for the regional waters, such as canals, streams and polder waterways. They make sure, for example, that the water is clean in order to maintain fish populations. Water boards protect the country against floods by managing the regional defences and some of the primary defences. They also make sure that farmers have sufficient water for their crops, but also not too much. They are also responsible for purifying waste water.

Municipalities are responsible for the groundwater in urban areas, as well as for removing waste water and excess rainwater via the sewers.

Tips for water use

On the Our Water website you can find all kinds of tips on how to enjoy water and to keep water clean and safe. For example, you should use water sparingly, collect water in your own garden and should not dispose of grease and chemicals via the sewerage system. You can also check to see how high the water will rise near your home in the event of a flood and which projects the government is implementing in your neighbourhood to ensure clean and safe water.

If there is something wrong with the water, you should report this to the government body responsible. This can be done centrally via the Water Notification Centre. 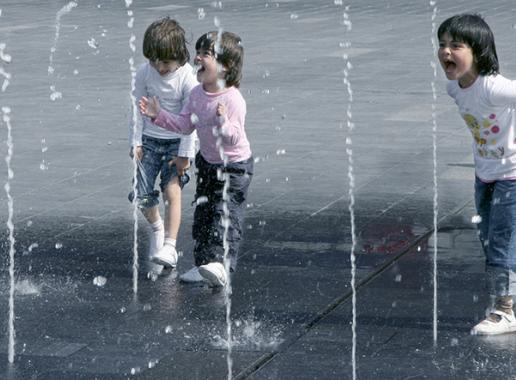