Nature offers peace and quiet and recreational possibilities. What's more, nature is important for biodiversity, a healthy living environment and the economy. One example is the pollination by bees of agricultural crops or the water-storing capacity of the soil. You can find an overview of all the services which nature provides us in the Atlas of Natural Capital.

Unfortunately, nature is still under pressure in the Netherlands, and elsewhere in the world. In the Netherlands, the biodiversity has decreased in quality and quantity to approximately 15 percent of the original situation. The loss of biodiversity is therefore substantially larger than elsewhere in Europe and the world. This is largely caused by agriculture and urbanisation. You can find more information about the trends in threatened plant and animal species in the Environmental Data Compendium.

Where can nature be found?

Nature is not only found in protected nature reserves, but also closer to home. Nature is present in your own garden, the outer walls of your home, green roofs in the city, flower-rich arable field margins and ecological noise barriers alongside motorways. Bees and butterflies can find food and shelter in both the towns and in the countryside. Connected nature reserves are also important as habitats for many mammals, birds and amphibians.

Nature has a positive effect on public health. Fresh air, space in which to exercise and briefly escape the many stimuli of daily life. Nature offers us peace and quiet and relaxation. Large nature reserves give a real feeling of freedom. Urban parks and gardens are ideal places to come into contact with the green environment on a daily basis.

Why does a natural environment have such a relaxing effect?

This is because it stimulates our senses differently. Scientists refer to this as the 'Attention Restoration Theory.’ In an urban environment there are lots of stimuli which have a major impact on our attention, such as cars racing by, a busy shopping street, etc. Research has shown that this 'involuntary’ stimulation of our attention reduces our capacity to focus and reflect. The stimuli from nature actually give us a relaxed feeling. Such as a fluttering butterfly, swirling leaves or the soft rustle of trees in the wind. In this way nature acts as a refuge for our overburdened mind. The result is peace and quiet and the chance to recover our focus, working memory and self-control.

The health effects of nature

Research has shown (e.g. Kaplan & Kaplan) that people feel less aggressive and fitter and happier after a walk through nature and are also able to focus more easily and experience less social stress. It is precisely this social stress that often plays a role in the development of burn-outs or anxiety disorders. What's more, children and adults with ADHD benefit from a natural environment because they are extra sensitive to stimuli that require our attention which they are unable to filter (source: Vries, S. de, R.A, Verheij and H.M. Smeets, 2015).

Green spaces and exercise reinforce each other

Green spaces also encourage us to exercise. Research shows that being outside in nature and exercise reinforce each other. People discovered that exercising outside takes less effort and is more fun than exercising in an indoor environment. This encouraged them to exercise more often.

Although large green areas like nature reserves have a favourable effect on people's health, the same applies to 'smaller' areas of green in people’s everyday surroundings, such as sports fields, flowerbeds, public gardens, parks and gardens. You can find more information under the health tab in the subtheme green living environment.

The most common risk for your health in Dutch nature is a tick bite. Ticks can carry pathogens and transfer these to people. The best known illness that you can catch from ticks in the Netherlands is the Lyme disease. Therefore , after you have been out in nature you should check yourself carefully for any tick bites. More information can be found on the sites of the tick radar, the RIVM or under the theme health on the Atlas of the Living Environment.

During the past 20 years a great deal of policy has focused on reversing the decline in biodiversity. Not only have emissions of environmentally harmful substances been reduced on a large scale, numerous areas have also been tackled to restore natural values (PBL, 2016). The area of protected nature has grown, and the environmental and water conditions have improved.

These improvements have helped to ensure the return of a number of species to the Netherlands and there has also been a slight improvement in the number of endangered species (source: Environmental Data Compendium).

The government wants to retain and reinforce the natural world in the Netherlands. That is why it drew up the National government's vision of nature for 2014 entitled 'Natural progress'. This vision of nature offers a strategy for nature policy which links up with citizens' initiatives and green entrepreneurship. The vision is based on a landscape approach at regional level. On top of this the Natural Capital Implementation Agenda is still applicable. This agenda contains action items which are intended to contribute to the conservation and sustainable use of nature.

Besides land-based nature, the government also wants to secure the future of large water bodies such as the Wadden area, the Southwest Delta, the IJsselmeer area, the North Sea, the coastal area and the river district. That is why a vision has been developed for these types of natural areas, namely the Large Areas of Water Nature Vision 2050-2100.

Green Deals are agreements between the national government, companies, social organisations and other government bodies. The Green Deal helps to implement sustainable plans. For example, the Infrastructure Green Deal was signed by various parties on 1 April 2016. The aim is to increase biodiversity along roads, railway lines, pipelines, dykes and waterways and to connect the Ecological Main Structure (EMS). Recent examples of this are the opening of the Honey Highway alongside the A4 motorway and the new heath corridor close to the Soestduinen water extraction area.

The Nature Conservation Act came into force in the Netherlands on 1 January 2017. This act replaces three other acts, namely the Flora and Fauna Act, the Nature Conservation Act 1998 and the Forestry Act. The new act is based on European regulations for nature conservation. It regulates the protection of nature reserves and plant and animal species. It also includes provisions relating to hunting and forest vegetation. According to this act the provincial governments are responsible for an area. They arrange the permits and exemptions. The Nature Pact of 2013 already assigned responsibility for the Nature Network to the provincial governments and social organisations. The national government continues to be responsible for the policy on large areas of water and international policy.

An application for an All-in-one Permit for Physical Aspects to the municipality is assessed against the Nature Conservation Act. It is also possible to apply directly to the provincial government for a nature permit or exemption. More information about permits and exemptions under the Nature Conservation Act can be found on the site of the Netherlands Enterprise Agency.

In the Netherlands, there are numerous agricultural areas and nature reserves which are valuable for nature and landscape. The provincial governments want to protect and continue developing the natural values in these areas. Farmers who manage their agricultural land in a nature-friendly way may be eligible for a subsidy. This is arranged via the Nature and Landscape grant scheme (SNL).

Land like heath, dunes and salt marshes do not count as agricultural land which qualifies for a subsidy. Nevertheless, this land is often used for grazing. In that case farmers can apply for the grazing animal premium.

Country estate owners can get a tax benefit to make it easier for them to maintain their estate. They will then have to open their estate to the public. This is laid down in the Estates Act. Governments, companies and non-governmental organisations (NGOs) which are involved in improving nature and biodiversity can submit an application to the European Union's LIFE programme.

The Nature Network consists of magnificent nature reserves. The vast majority of these are easily accessible. Some areas contain 'rambling areas' which are freely accessible, including outside the established paths. The regulations governing the nature reserves differ per area. For example, there are rules about the times you are allowed to be in the area. Often this is from sunrise to sunset. Other rules relate to keeping dogs on a leash and using motorbikes/bicycles. The rules can be found on signs at the entrance to the area. Many nature reserves have implemented a ban on flying drones. You can view these areas on the Atlas map of the Drone no-fly zones.

Waste does not belong in nature. Unfortunately, cigarette butts, cans and bottles often end up littering the countryside. However, people sometimes also dump household items, building materials and even waste from drugs laboratories. It is best to report litter to your municipality or the forest ranger who is in charge of the area. If you witness illegal dumping or a suspect situation, please contact the police. Forest rangers are responsible for supervision and enforcement in nature reserves. It is best to report nuisance or vandalism in the countryside to your local forest ranger.

Most national parks have a visitors centre or information point and activities which are organised on a regular basis. On the website of the national parks you can find information about the accessibility, availability, routes and parking rules. National Forest Service in the Netherlands and IVN also organise all kinds of activities in nature for young and old.

On National Tree Day children can help to plant trees. Every year, an average of 200,000 trees are planted throughout the Netherlands. On the National Cleanup Day people throughout the country come together to clean up litter in a certain public area.

It is also possible to contribute to nature by doing voluntary work. The national Nature Work Day takes place on every first Saturday in November. However, there are opportunities throughout the year to get involved.

On the website of In green spaces is better you can find all kinds of activities taking place in a natural environment. These range from weekly walking groups and outdoor sports lessons to child therapy and reintegration into green spaces. The activities take place either in a nature areas reserve or indeed close to home. You can search on the basis of postcode or place the opportunities offered by 'In green spaces is better'. 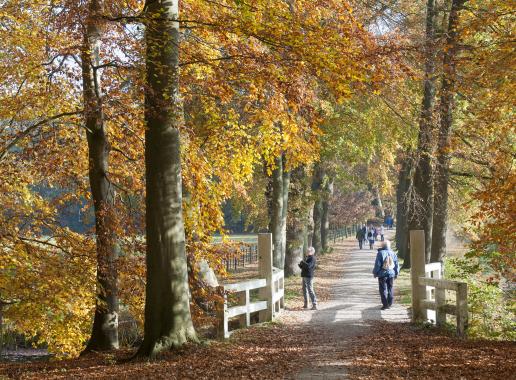 Cooling effect of green and blue