Wet cooling towers may be a source of the Legionella bacteria, particularly in combination with poor maintenance or management. Legionella is a bacteria which can lead to an acute infection of the airways (legionellosis). For that reason it is important to know where these installations are located.

Wet cooling towers are part of cooling installations which are used to remove excess heat from production processes and buildings by nebulising water in an open construction. Wet cooling towers are well-known sources of Legionella bacteria. A legionella infection can lead to a severe pneumonia, known as Legionnaires' disease. This serious form of pneumonia can result in long-term health effects. In the Netherlands approximately 2 - 10% of patients die after catching Legionnaires' disease. The risk of death is greater if the patient is elderly.

Where can they be found?

Wet cooling towers are known throughout the world as being a key source of infection, as the Netherlands has already experienced. In 2006 there was a Legionellosis outbreak due to a poorly maintained wet cooling tower at the Post CS building in Amsterdam. Consequence: 31 people became ill (some chronically) and three people died.

Legionellosis is an infection of the airways and lungs. The infection is caused by the Legionella bacteria. This disease is known to manifest itself in two ways: Legionnaires' disease, a serious form of pneumonia, and Pontiac fever, which is a flu-like illness. In most years there are between 300 and 400 reports of patients who have caught Legionnaires' disease in the Netherlands. The disease is more common in summer than in winter.

Legionella is a bacterium which can make you ill if you breathe it in. The legionella bacterium can be found in nature in the ground and in the water. In groundwater and surface water there are normally only very small quantities of Legionella bacteria. However Legionella can grow quickly in drinking and process water, particularly if the water is not flowing properly, or is recirculating and is at a temperature of between 25 and 45°C.

Most people do not become ill after they have been infected. If symptoms do appear, that usually occurs five to six days after the infection (with a possible variation of between two and twenty days). Legionnaires' disease begins with a mild fever, muscle pain and generally feeling unwell. After a couple of days the sufferer experiences pneumonia and a high temperature (more than 39°C) and cold shivers. If you experience any symptoms which might indicate pneumonia, you should consult a doctor. The disease can be confirmed by laboratory tests. In the event of serious pneumonia the disease can be life-threatening because other organs are damaged by the bacteria. In serious cases people can die.

The nebulisation of water (in wet cooling towers but also, for example, in showers or whirlpools) can spread bacteria through the air where they can be breathed in. You cannot catch Legionnaires' disease by drinking water infected with Legionella. It is extremely rare for a patient with Legionellosis to infect someone else.

There is no vaccination against the Legionella infection. Prevention therefore focuses on avoiding the spread of Legionella bacteria into the air wherever possible, for example by preventing the bacteria being able to grow into large quantities.

The Environmental Management Act [Wet milieubeheer] stipulates that anyone who uses a wet cooling tower must maintain and manage it properly in order to control the risk of Legionella infection. Municipalities and provincial governments are responsible for monitoring compliance with those regulations. The environmental services and regional implementation offices are responsible for ensuring compliance.

Municipalities are the designated competent authority on the grounds of the Environmental Management Act for the majority of the wet cooling towers. The provincial government is the competent authority for the wet cooling towers at a limited number of (larger) facilities. On the grounds of the recent amendments to the Environment Law Decree (Bulletin of Acts, Orders and Decrees 2017, 193, which came into force on 1 July 2017) the monitoring of all wet cooling towers is one of the basic tasks of the environmental service. This means that the environmental service monitors the area in question on behalf of the provincial government or the municipalities. Lastly the Living Environment and Transport Inspectorate is responsible for monitoring and enforcing in the case of several dozen wet cooling towers at certain Ministry of Defence facilities.

The supervisory bodies are expected to add all the wet cooling towers they have knowledge of to the Atlas of the Living Environment to ensure that the locations are known to the general public.

Anyone can report a possible wet cooling tower to us. With your help 1,352 wet cooling towers had already been reported up until 2018. The step-by-step plan contains a short description of how this works in practice. 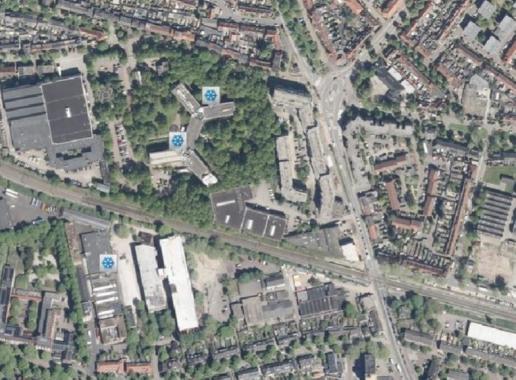 Read this step-by-step plan to find out how you can report a possible wet cooling tower to Atlas Leefomgeving.