Farmers are responsible for the production of food and ornamental plants. However, the countryside has more to offer than this. For example, rural areas are becoming more and more popular for leisure pursuits. What is more, they offer nice places to live and there is enough space for the emergency storage of excess rainwater. The countryside is also home to certain cultural-historical landscape elements such as old grain mills. If managed naturally, the countryside is rich in butterflies, bees, insects which control pests, herbaceous plants and meadow birds.

Agricultural production has become more and more intensive in recent decades. More than half of the total surface area of the Netherlands is used for agriculture and horticulture. Between 1980 and 2015 a significant increase in scale took place in the agricultural and horticultural sectors. While the number of companies decreased by 56%, the land used for agriculture only decreased by 8%. The scale of the agricultural sector in the Netherlands means that agricultural activities are placing considerable pressure on the environment. Intensive farming often has a negative influence on water, soil and air quality, climate change, biodiversity, odour nuisance and water management. Between 1990 and 2005 the pressure on the environment caused by agriculture decreased significantly. After that, the environmental pressure remained approximately the same (source: Environmental Data Compendium).

Besides intensification, a smaller group of farmers are opting for specialisation and a broadening of the production of sustainable food. This broadening can provide a basis for an extra source of income in the form of nature conservation, care farming, childcare, campsites or a farm shop (source: PBL, 2015).

In the case of these types of agriculture, fertilisers and the use of pesticides can be harmful for the biodiversity and the quality of the ground and surface water.

RIVM is currently investigating whether people who live close to agricultural plots are also exposed to pesticides via the air. It is known that, in the context of cattle breeding, substances are released into the air such as ammonia, methane, nitrous oxide and particulate matter. These substances have a detrimental effect on air quality, cause odour nuisance and contribute to climate change. Farm animals can also transfer infectious diseases (zoonosis) and constitute a risk for public health.

Recent research by RIVM has revealed that COPD patients who live in the vicinity of livestock farms experience more complications related to their illness. The researchers also observed that pneumonia occurs more frequently in the vicinity of poultry and goat farms. On average 1,650 people suffer from pneumonia for every 100,000 residents. Of these, more than 200 cases of pneumonia are caused due to people living close to a poultry farm or goat farm. In the case of poultry, this is probably caused by increased concentrations of particulate matter and endotoxins (small elements of bacteria and viruses), because poultry farms emit relatively large quantities of particulate matter and endotoxins.

In the Netherlands approximately 90,000 people live within 50 metres of a bulb or fruit plot. It is unclear to what extent local residents are exposed to pesticides used on those plots. Research is being carried out to establish this.

Farm animals can transmit infectious diseases. If these infectious diseases are contagious for people, we tend to use the term zoonoses. Previous outbreaks of zoonoses, such as Q fever and the bird flu are well known. Another danger comes in the form of bacteria which are resistant to antibiotics (for example MRSA which is primarily a risk for people who work intensively with pigs and veal calves).

Agriculture can, however, influence the living environment in a positive way. For example, urban farming can benefit local food production, the image of the town or city, water storage and social cohesion between town or city dwellers. Nature-inclusive agriculture can help to improve the nature and landscape values in the countryside (Nature-inclusive agriculture measures 2017). This is a form of agriculture whereby food production has no or minimal detrimental effects on soil, water and air quality, biodiversity, landscape elements and the climate. In addition maximum use is made of services provided by nature itself, such as natural pest control, pollination and soil fertility.

The government targets for the quality of water, nature, soil and air are largely determined by agreements and guidelines within the European Union and in other international contexts. These guidelines have been, or are going to be, translated into national laws.

As an agricultural entrepreneur, you can offer all kinds of services which may generate income services in addition to the production of food and ornamental plants. One example is a small-scale campsite or care farm. Agricultural nature also enables recreation. If you want to start a farm accommodation business, you can consult the rules here.

Currently, no legislation is available which contains guidelines and rules for nature-inclusive agriculture. The central government's vision of nature for 2014 entitled 'Natural progress' includes nature-inclusive agriculture as a spearhead when it comes to making food production sustainable and contributing to a robust and diverse natural environment. This was followed in 2015 by the adoption of the Food agenda for safe, healthy and sustainable food which advocates a change of direction as regards the relationship between food and nature.

You can experience nature or the countryside yourself by taking a walk through an agricultural area, by camping on a farm or by taking part in the many leisure activities offered on a variety of farms. Agriculture is combined with tourism and recreation in all kinds of ways, for example farm restaurants, farmer's golf, rural museums and accommodation/bed-and-breakfast facilities. Most municipalities also have petting zoos. Their visitors can learn about farming life and the animals that are kept there.

Lots of cheese and dairy farms sell products to consumers via their own farm shop which varies from a corner in the cheese store to a tastefully decorated country shop. A map of farm shops can be found on this website.

For the agricultural entrepreneur

If you work in the agricultural sector and are considering switching to nature-inclusive agriculture, please visit the site of the Natural farmers foundation. This is an association of organic farmers who are working to improve nature and landscape values. Attention is also paid to recreational activities such as farm campsites and meadow bird safaris.

Dairy farmers will be interested in the Vereniging tot Behoud van Boer en Milieu (VVBM). They operate in accordance with the natural recycling system with their aim being to optimise the soil-plant-animal-manure-cycle.

The Nature Inclusive Agricultural Network dossier was compiled at the request of the Ministry of Economic Affairs. This dossier contains up-to-date knowledge of nature-inclusive agriculture.

At Atlas Natural Capital you will find success stories about the use of flower-rich arable field margins as part of the Hoeksche Randen project to encourage natural pest control, the meadow bird management in Amstelland and the closing of fertile cycles in agriculture.

Read more about nature and agriculture 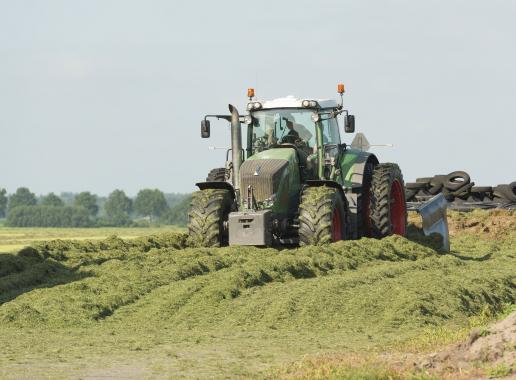 Biodiversity
Diversity of species in the Netherlands
Bee diversity map